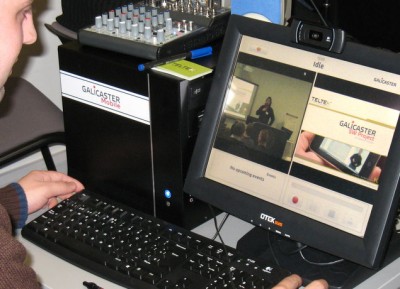 We are happy to announce this new release of the Galicaster software!

The Galicaster software turns an ordinary computer into a Galicaster device, as long as it meets the hardware recommendations provided in the release.  A Galicaster device is a  dual-stream (Video + VGA) recording device, designed to work with a touchscreen interface and including many interesting features. It can work as an  improved  Opencast-Matterhorn Capture Agent.

“I have to say I’m really impressed with what you have done. You seem to have thought of everything. Galicaster gives the user so much feedback in terms of what is happening.  It’s not often you use software and laugh out loud when it behaves so nicely.  Like when I saw the “recording starting in HH:MM” after I run a schedule from my test server. It’s very easy to get around. I love it.”
(Kirk Rutter, Learning Support Officer,  University of the Arts London)

Galicaster can be used as an automatic in-room recording solution for the classroom, keeping the professor informed and in control, or it can be used as a mobile unit, perfect for recording meetings and conferences.